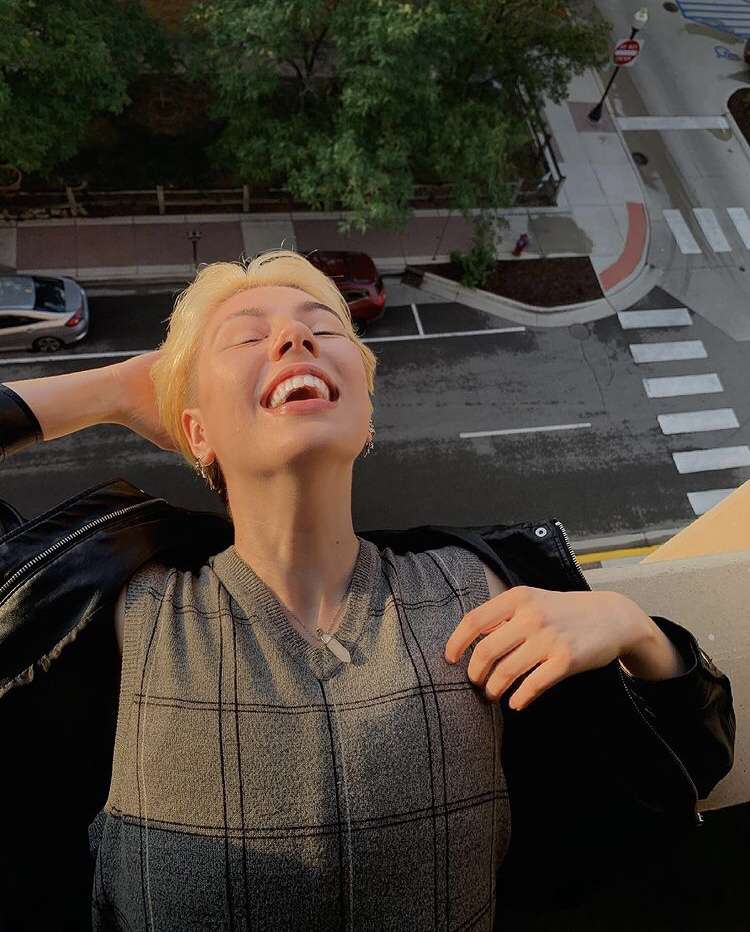 Sarah Owens has read an impressive amount of manga. One day, a classmate praised their dedication to the genre by telling their teacher, or sensei: “Owens-San has read every volume of Attack on Titan!” Their sensei replied bemusedly, “Owens-San should spend less time reading manga, and more time studying!”

Although Sarah had initially described this interaction as one of their more embarrassing moments learning Japanese, they were able to laugh it off with confidence. “I wasn’t studying as much at that point,” they admitted. Today, Sarah is an advanced Japanese student in their sophomore year at Michigan State. They attribute their progress to their language learning community, disciplined study habits, and of course, their love of manga and anime.

Sarah enjoys literature across a variety of genres, which is no surprise given their passion for language. In addition to Japanese, they are also majoring in English, and considering career paths in publishing and translation. They are interested in writing and producing their own poetry collections in the future, too. From haiku to novels by Osamu Dazai, Sarah is fascinated by the convergence of cultural backgrounds. This is what excites them about language learning and encourages them to foster a community of like-minded individuals.

Of course, finding connection is something all college students crave more than ever given the circumstances of the pandemic. Sadly, many language students were forced to miss out on traditional immersion opportunities, such as studying abroad. Travel restrictions and health concerns made these programs impossible over the past two years. Still, Sarah and other students seeking cultural engagement found an innovative way to experience a foreign culture without ever leaving their homes. Sarah and many other Japanese students from around the world met in a virtual classroom during the 2021 summer semester. Although these students did not get the opportunity to physically experience the adventures travelling to a foreign country brings, they were still able to enjoy an international community online.

When asked about the people they met during their remote summer immersion program, they instantly lit up. “Some of the best friends I have at Michigan State are the people I did the study abroad experience with,” they remarked. They were particularly impressed by the multilingual students, and excited to share the process of language learning with people who have similar interests.

In contrast to the thrill of meeting people from across the globe, Sarah also acknowledges the vulnerability associated with practicing a second language. Miscommunication is inevitable in these environments, so patience and the willingness to understand were absolute necessities over the course of the program. “We relied on each other a lot,” they said, and the trust they built resulted in an emotional, healing experience despite the challenges presented by virtual learning.

Although Sarah appreciated the social growth and academic development they underwent this past summer, they are still adamant about actually studying in Japan at some point during their undergraduate experience. They are especially interested in pursuing an internship abroad to strengthen their understanding of Japanese business culture and the classroom environment in Japan.

Having professors whose native language is Japanese is a huge advantage to the learning process, according to Sarah. “That way, [the student] gets a better understanding of the culture and language.”  The professors also offer a personal addition to language learning, as so many aspects of culture cannot be taught through a textbook, only through lived experiences.

The support system of a language learning community not only involves professors and peers, but also the support that comes from oneself. Building confidence is an integral part of communication. It is the result of trust in others and in your own abilities and is best cultivated in a place of respect for culture and diversity.

As Sarah expanded their mind to consider the world from the perspectives of a different culture, they also expanded upon the way they perceive themselves. During their time at MSU so far, they found a myriad of ways in which they can express their identity using the skills they developed while studying Japanese. For example, Japanese speakers use primarily name-based identification. That is to say, a person’s name is used more frequently than pronouns in comparison to English, and the speaker can decide how much information they wish to divulge about their gender expression. In Japanese, the speaker can choose between using masculine, feminine, or gender-neutral vocabulary to describe themselves and others. The privacy that this custom establishes allows gender non-conforming individuals such as Sarah to gradually present their authentic selves to the world. There is a certain comfort to be found in introducing yourself on your own terms, something Sarah has found to facilitate their path to self-acceptance.

Accepting is part of understanding, something that is critical in developing the confidence and trust needed for a successful and positive language-learning experience. Be it gender identity or an enthusiasm for manga, Sarah Owens knows that self-acceptance is the first step to accepting and celebrating others.