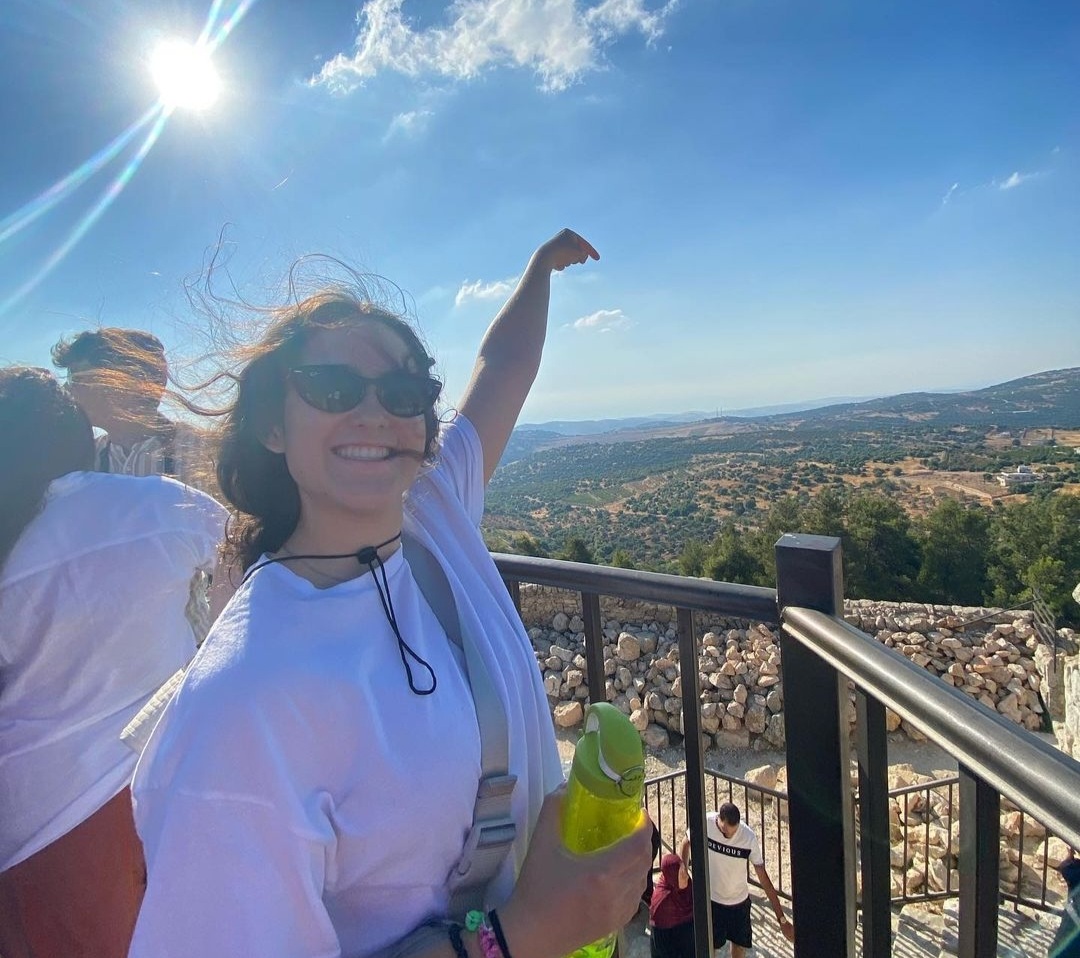 Isabelle Borr (Class of 2024) embodies diplomacy. From Model UN in high school to majoring in International Relations and Arabic with a minor in Security Management at James Madison College, Isabelle has always taken an interest in global affairs. Following graduation, she hopes to enter the foreign service industry or work in aerospace defense. She has studied a few languages, including Hebrew, French, and most recently, Arabic.

From a young age, Isabelle was fascinated by geography. She studied her niche interests for fun, like water buoys, borders, and maps. She enjoyed watching her aunt and uncle travel the globe and discussing politics with her father. But Isabelle noticed that oftentimes the discourse was one-sided. “Growing up Jewish…” Isabelle says, “you learn one side of the Israel-Palestine conflict very heavily, and you don’t really understand the other side.” So, when Isabelle came to MSU, she decided to study Arabic so she could learn from a different perspective.

But learning a new perspective doesn’t mean Isabelle abandoned her own values. Despite the concerns she has about the intersection of religion and politics, Isabelle asserts that learning both sides of the issue is part of bettering herself “as a Jewish person.” She can synthesize the positive values she was taught by her faith and recognize when those values aren’t being upheld in global politics. She also emphasizes the importance of understanding and respecting both sides of a conflict in the diplomatic field. Recognizing the advantages of learning a language in a university setting, Isabelle says that taking Arabic seemed like the perfect opportunity.

Isabelle didn’t wait until she had the chance to study and travel abroad to immerse herself in Arab culture. Dearborn, MI has one of the highest Arab-American populations in the country, so many of the billboards and street signs include Arabic text. Isabelle was thrilled to be able to read these signs while visiting friends.

In addition to her Arabic immersion experiences, Isabelle has also had an abundance of experiences with Hebrew. She began learning at a Jewish day school in first and second grade and attended an Orthodox school for the remainder of her elementary school days where she had increased exposure to the language. She also traveled to Israel with her family, a trip that was fundamental to her decision to major in International Relations and Arabic. She describes being able to notice microaggressions while abroad. She said that travelers could tell “who owned what” based on the languages the signs were in in each area, a political statement meant to exclude members of the other party. In the Muslim quarter of Jerusalem, Isabelle and her family were shunned when asking for directions because of their heritage. She noticed the animations at the West Wall Museum of Palestinian homes being cleared for the attraction, the thick concrete slabs dividing the city, and the entirely different atmospheres of the communities around the Gaza Strip.

This summer, Isabelle had her immersion experience from “the other side” in Amman, Jordan. Although she and her family were wary of the risks of being a Jewish person traveling in a primarily Arab nation, Isabelle was excited and felt the necessity to go. While in Jordan, Isabelle lived with a host family, and had to speak Arabic everywhere she went. Although the language barrier was difficult to manage at first, she was able to combine what she already knew with the new terms she learned to communicate.

The language barrier wasn’t the only difficulty to overcome. The classes she took required much more studying and effort than what she was used to back in the States. Fortunately, Isabelle also learned a lot about adapting to new environments while abroad. Although she missed her friends and family back home and encountered a variety of challenges living on her own in a foreign country, Isabelle knew this was a once-in-a-lifetime opportunity worth cherishing. She says, “Keep saying yes to any opportunity that presents itself. We are only in college once and this is the time to explore.”

This fall, Isabelle is seizing yet another incredible immersive experience abroad. She is traveling to the capital city of Muscat, Oman, where she will work at the United States Embassy. The internship is with the Bureau of Near Eastern Affairs as well as working with the consular office. Anyone can apply to the student internship program! If you are interested, visit USAJOBS.gov to learn more.

Congratulations to Isabelle for her astonishing achievements thus far. It is clear that she can do anything she sets her mind to, and that she will make a fantastic foreign service worker one day. Safe travels, Isabelle!