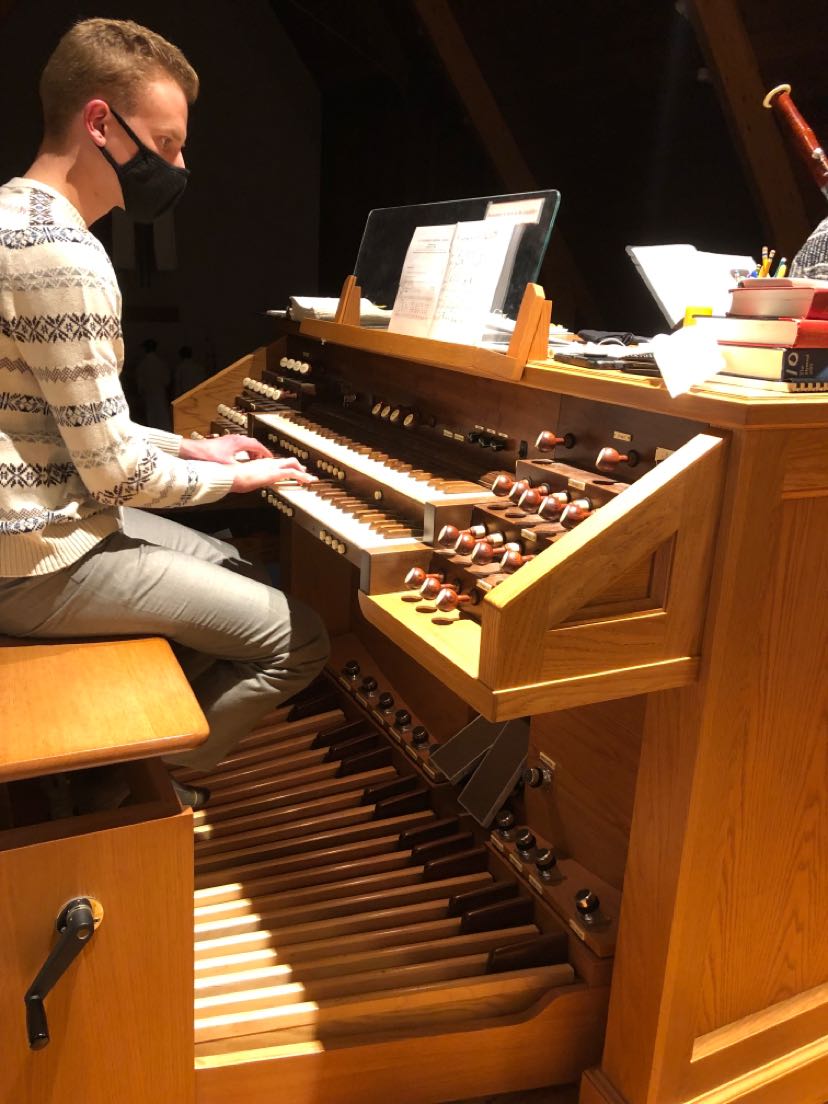 In college, everyone tells you that if you find a job doing what you really love, you will never work a day in your life. While this is an excellent piece of professional development motivation, it may not be the path for everyone. Therefore, it is equally beneficial to create a balance between your work life and your personal hobbies.

Take for example MSU French Club President Austin Pike, a human biology major who hopes to attend dental school after his graduation in 2023. Although his professional endeavors lean toward the realm of medicine, Austin is taking advantage of the opportunities in French that Michigan State offers so that he can continue to explore his personal interests.

Austin actually discovered his passion for French culture amid another leisure activity: classical music. He began playing in an orchestra on the clarinet, eventually switching to keyboard instruments once he realized his affinity for baroque music. On Sundays, he plays the organ for his church, and he also has an interest in other period instruments such as the harpsichord. On Monday, April 4th, Austin will present a showcase at St. Katherine’s Episcopal Church in Williamston, MI for the French Club, and anyone else who is interested in attending.

If you have not attended one of the French Club meetings at MSU before, Austin describes them as a supportive, laid-back environment where speakers of all levels and backgrounds are welcome. Austin himself is a self-described intermediate-level learner, but there are also a few native speakers involved with the club, too. The meetings are always a thoroughly enjoyable experience, with weekly activities such as Jeopardy or even crêpe nights at For Crêpe’s Sake on East Grand River. The goal of French Club meetings is to get people who are interested in French to engage with the culture and language, and to practice, practice, practice!

One of Austin’s favorite ways to practice his second language is, of course, through his music. French is one of the three main nationalities from where baroque music originates, Italian and German being the other two. Therefore, the languages, cultures, and genres are heavily intertwined. Austin said that he began learning French so that he could read the original treatises for the songs he plays. These documents recount the historical context surrounding the music, as well as stories and information about the composers, instruments, and performances.

Naturally, being passionate about the culture or having an interconnected interest make excellent motivators for studying a language. In addition, Austin also stresses the importance of having reasonable expectations for oneself. Although he is highly involved with the French Club and takes a French class each semester, he is not majoring or minoring in the subject. Unfortunately, his rigorous biology courses prevent him from being able to complete all the requirements. But that does not stop his course of study whatsoever.

Austin says, “I will never sound like a native, fluent speaker, but I think that’s okay.” By setting practical goals, he maintains a positive attitude surrounding his French studies, generating even more success and results. He also says that it is important to accept how much you do not know because this also maintains sensible expectations while still encouraging growth and the acquisition of knowledge. In actuality, Austin is just happy to have French as a hobby and an overall supplement to his life.

He also emphasizes the effectiveness of “faking it until you make it” in terms of confidence, both in the classroom and onstage. Speaking to another person in a second language can be just as daunting as performing for an audience. The best way to face the anxiety, according to Austin, is to just rip off the band-aid and do it. Eventually, you will come to find that that confidence becomes authentic. Austin says that both performing the organ and practicing French help him to overcome fears and to become more adaptable in high-pressure situations.

If you are interested in viewing Austin’s performance, learning more about baroque music, or getting involved with the French Club, join us at Wells B104 on Monday, April 4th at 6 p.m. There are limited spots available for those in need of transportation to the church. There, Austin will give an oral presentation of the history and culture surrounding the music, as well as a spellbinding performance of songs by François Couperin and Louis Marchand. We hope to see a wide variety of language-lovers and music fanatics alike. Break a leg, Austin! Bonne chance!