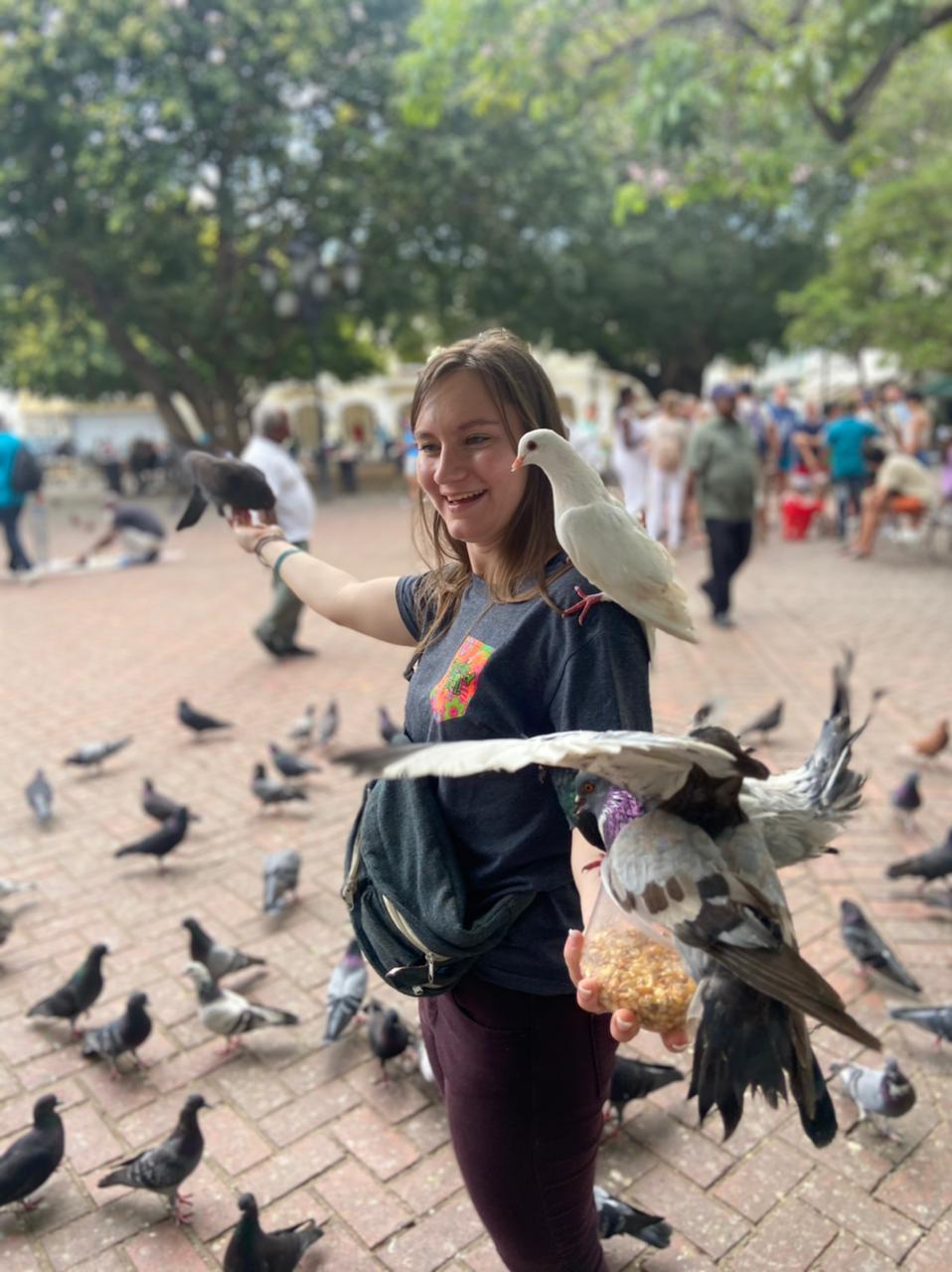 Sierra just finished her undergraduate degree at Wichita State University on a customized linguistics study path with a minor in Spanish. Now, she is studying TESOL (Teaching English to Speakers of Other Languages) at Michigan State. So far, she has enjoyed the classes she has taken here, such as Language Teaching Methods (LLT 807) and ESL Classroom Practices (LLT 895). However, she has not taken any Spanish classes at Michigan State. Even still, Sierra has found plenty of other ways to engage with her second language, and to continue developing her interpersonal communication skills.

Having friends who live abroad is something Sierra prides herself on. She met many of them through Cru, a Christian faith-based volunteer organization. She also volunteered as a conversation partner at the English Language Center, where international students can go to learn English before taking courses at an American school. Sierra has friends across Latin America from Paraguay to Peru, and a friend from the Dominican Republic with whom she is especially close. In fact, Sierra had the incredible opportunity to spend a week in December with this new friend in her home country, exploring the bustling cities and lush landscape of the Dominican Republic.

Much to her happiness, Sierra found a community of people who are close-knit and affectionate. “I think relationships come first in that country,’ she says, describing the way that Dominican people prioritize the people in their lives over work and other obligations. She described their schedules as more relaxed than those of career-oriented Americans, which of course makes more room for excitement and fun. According to Sierra, there is music playing on every street, and loud, boisterous energy pours out of every building. She walked through the cities with her friend and her friend’s family eating tostones, chips made from smashed and fried plantains.

While she adventured through the Dominican Republic, she had plenty of chances to exercise her knowledge of Spanish. She says that she learned more about Spanish in that one week than she had in all the time she studied in the classroom. For example, she discovered new insights into Dominican accents, and how their vernacular differs from the European/Mexican Spanish she was primarily taught. She was also able to build her confidence in speaking, given that she had so much practice during that week.

Once she returned to the U.S., she continued to engage in immersive opportunities for Spanish, rather than returning to a classroom. She plans to begin teaching an ESL course through her TESOL classes in coordination with the English Partners in Communication (EPIC) program at MSU. She also keeps in regular contact with her friends from Latin America, so that she can continue to learn more about various cultures. As a result, Sierra and her community have developed a sense of empathy in relation to second language learning, which creates a supportive environment for all those involved.

After all these experiences, Sierra says that she has opened and expanded her mind to a myriad of new perspectives. “The way we perceive the world is very influenced by our language backgrounds,” says Sierra. Each language has its own unique set of connotations and histories; when we learn a language, we learn a culture. Worldliness is akin to open-mindedness. In understanding other cultures and their worldviews, we have a better understanding of ourselves. We have more options to choose from when we learn about other values, and thus can decide for ourselves what we genuinely believe, instead of perpetuating the beliefs from our homes that we may not necessarily agree with. In other words, to learn a second language is to learn empathy and compassion for people despite cultural differences.

Our team at CeLTA wishes Sierra luck this semester and in the future, where she will continue to flourish in her quest for worldly knowledge. We are quite fortunate to work with someone who is so committed to meaningful connections and quality learning experiences. We cannot wait to see all the amazing things she will do!