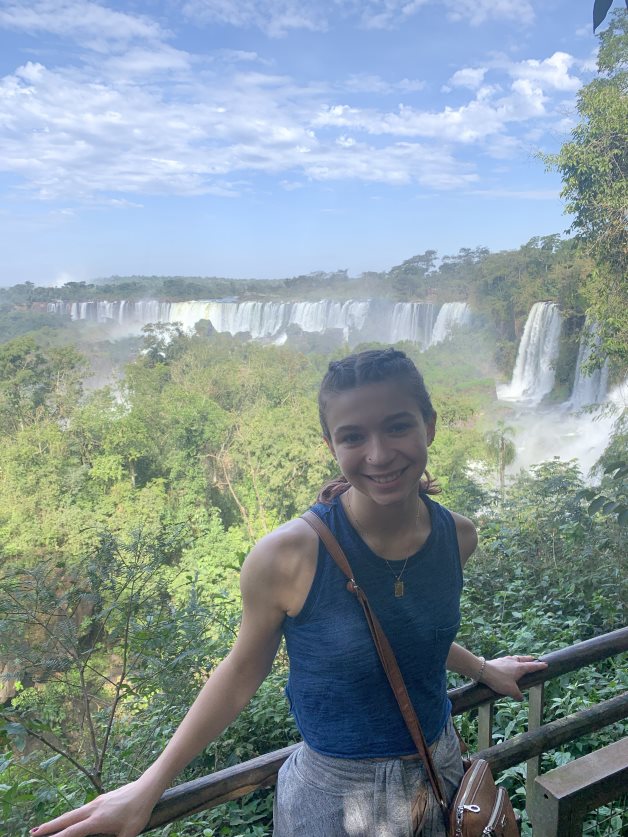 Natalie Harmon (2024) may be a Comparative Cultures and Politics major, but she is also a connector of cultures. During her time at MSU and abroad, she has expanded her language skills as well as her knowledge of a variety of cultures in the Hispanophone and Lusophone world. These developments helped her flourish in the realm of international politics and opened tons of lines of communication.

In addition to her CCP major at James Madison College, Natalie also has an additional major in Spanish and a minor in Portuguese. Spanish has already played a role in Natalie’s career. Currently, she has a side job translating instruction manuals for an automotive company into Spanish. In the future, she definitely hopes to incorporate language into her career, and is even considering the possibility of studying Spanish Linguistics in grad school.

Natalie has studied Spanish since middle school, and she just picked up Portuguese last year. Despite only studying it for a short amount of time, she has quickly fallen in love with the language. Because Portuguese is a Less Commonly Taught Language, the class is much smaller than that of more commonly taught languages. This has worked out in Natalie’s favor, as she has more opportunity for conversational practice and to get to know her professors better.

Most people assume that having the previous knowledge of Spanish would make learning Portuguese easier, given their similarities as Romance languages. While this is still generally true, Natalie also points out that this can actually make things difficult! Because the languages are so similar, it is easy to mix certain phrases up. Natalie shares all the natural worries that language learners have: sounding silly and making mistakes, especially in front of native speakers. However, she has also been able to overcome these anxieties when she realized that people wouldn’t judge her mistakes as harshly as she’d expected.

This especially came into play during her internship abroad in Buenos Aires, Argentina last summer. For the first two weeks of the ten-week program, Natalie took an intensive Spanish course at the Vos Language School. Although her interpersonal communication skills were already strong, that level of immersion gave her the boost she needed to carry out her internship for the remainder of the program. In addition to learning about the language, she also learned a great deal about Argentinian culture. She built her community abroad with the friends she made there. Together they went to cooking nights hosted by the school, where she learned how to make empanadas and a squash stew called locro, the national dish of Argentina. She enjoyed her time at the language school so much that she even went back to visit after she left to start her internship.

For eight weeks, Natalie worked in the city legislation office for the Asociación civil Mujer y Gobierno (Women in Government Civil Association). She had the opportunity to examine how the pandemic affected public employees in Buenos Aires, and the gender-based dynamics and disparities presented in the data. She was responsible for surveying government employees about their experiences as well as analyzing and discussing the data in a report of her findings. She attended meetings in the Human Rights department of the city’s legislative office, conducted entirely in Spanish. All her work was conducted in Spanish, for that matter.

It is certainly safe to say that Natalie has already garnered some impressive experience in her field. In addition to the work experience, she also gained a great deal of life experience during her time in Argentina. The people she worked with spoke either very little English or none at all, so she had no choice but to fully immerse herself in Spanish conversation. Despite the language barrier, the small office formed a tight-knit community working for a great cause.

One of Natalie’s favorite memories abroad was the trip she took with a group to the Iguazú Falls on the border of Argentina, Brazil, and Paraguay. There, she had the rare and special opportunity to use both of her second languages. She was the only member of her group who spoke Portuguese, so she helped her friends order food and buy tickets. The falls were among the most breathtaking things Natalie had seen in her life, a reward for her dedication and perseverance.

Back in the states, Natalie is currently taking Portuguese 320, which focuses on the media and politics in Brazil. This class will help her fine-tune her skills and become more culturally knowledgeable, which will undoubtedly serve her in her career. When she needs a boost of confidence, she thinks about being in Argentina. Knowing that she was able to work for the civil government of a city in a foreign country is confirmation of the fact that she can move forward.

To every language learner out there, Natalie encourages taking the opportunity to travel and immerse yourself in the language and culture whenever possible. She emphasizes the importance of listening to new perspectives, perspectives that can multiply with learning a new language. “You could be missing out on some of the greatest perspectives,” she says, “because you [haven’t] learned the language.” And, of course, to remember that making mistakes is part of the process. You will be able to overcome!