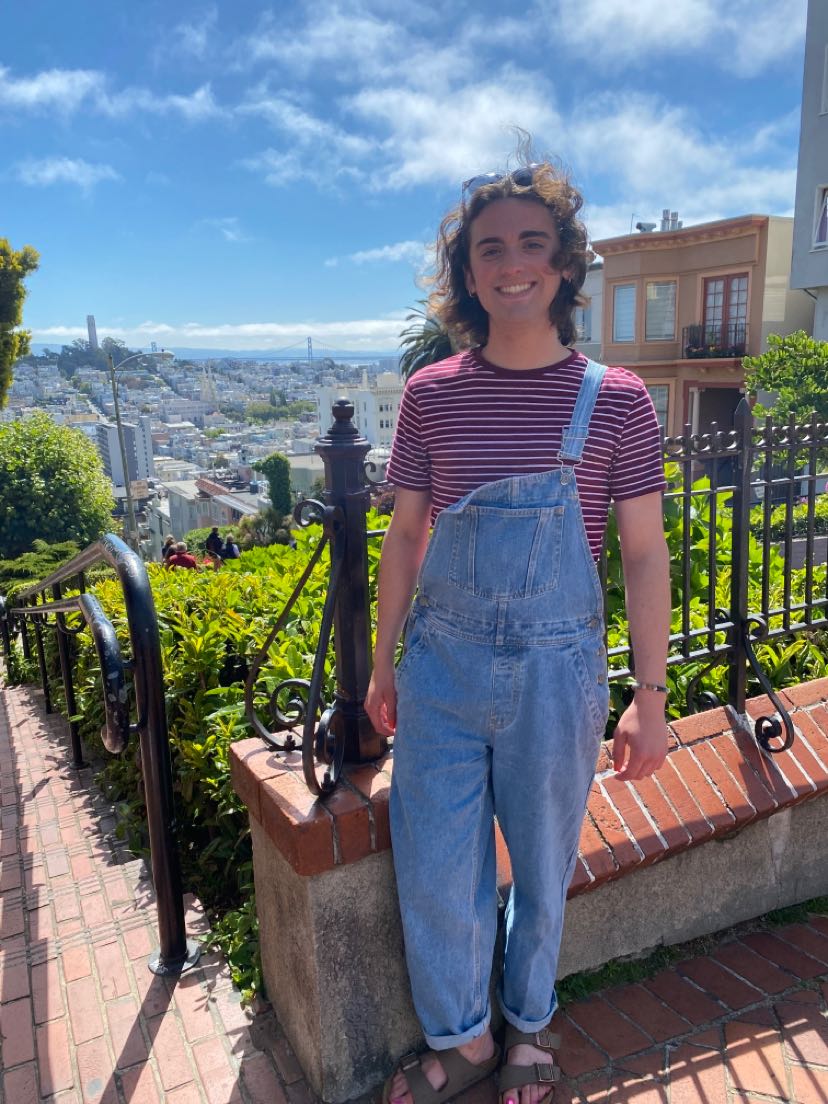 Language learners are among some of the hardest-working students in college. The lessons are rigorous, the commitments are high, and practice must be constant in order to be successful. Matt Miller (2023) exemplifies the dedication of language learning to their core. They are currently finishing their undergraduate degree in in the Residential College of Arts and Humanities, as well as a dual degree in Russian, and a minor in TESOL.

Matt has been enamored with language since their middle school days in their hometown of Buffalo, NY. They began studying Spanish in seventh grade, and from there began teaching themselves French until they had the opportunity to take classes in high school. The Spanish teacher they had in high school was integral to their decision to continue studying language. She was a native speaker from Puerto Rico and offered Matt supplemental study materials and conversation practice.

In addition to taking both Spanish and French in high school, they also began learning Russian at the age of 14. They didn’t have the opportunity for Russian classes in high school, so they decided to teach themselves on Duolingo. Because linguistics was their passion since youth, they dabbled in a variety of languages on Duolingo until deciding to stick with Russian. One of their closest friends at the time was from Belarus and spoke Russian, which encouraged their choice. They’ve noticed that having a close relationship with someone who speaks one of their languages reinforces their studies and motivates them to keep learning.

When they were 16 years old, they studied abroad in Chisinau, Moldova with the NSLI for Youth program. This was a huge leap of faith for Matt, having only studied Russian independently for two years. Moldova is a bilingual state (Moldovan/Romanian and Russian), so much of the city was inaccessible to English speakers. In addition, many traditional Moldovan dishes are seasoned with dill, which Matt unfortunately does not like. Despite these obstacles, Matt overcame them and had a highly formative experience abroad. They were fascinated by the unique history of the country, and even fell in love with a dish called pelmeni, a type of dumpling typically served with smetana, a Russian sour cream. Back in the U.S., they still enjoy cooking Russian cuisine!

Unfortunately, the pandemic and ongoing Russian war in Ukraine have made it impossible for Matt to study abroad in the region (MSU will possibly offer a Russian study abroad program in Latvia). However, they still found ways to immerse themselves in the language and culture right here in the Midwest. Last summer, they attended the Indiana University Summer Language Workshop, where they spent eight weeks in intensive Russian classes. The program was arduous, involving 4-hour long classes each day, homework, and extracurricular activities. Still, Matt says that this program greatly improved their Russian skills, and now they are at an advanced conversational level.

Back at MSU, Matt partakes in a variety of language activities on campus, such as Cultures and Languages Across the Curriculum. This program offered by RCAH provides Integrated Language Options to students, as well as other opportunities to practice outside of the traditional language classroom setting. Matt also serves as the Treasurer of MSU’s French Club. There, they made strong connections with the other students who are passionate about French and language learning in general. They admit that things have been a bit chaotic as they rebuild the club’s strength coming out of the pandemic, but that no matter what, French club is always a fun time!

After college, Matt wants to take some time before grad school to travel and teach English to speakers of other languages. They are applying for a variety of opportunities, including the Teaching Assistant Program in France (TAPIF) and the Peace Corps. They currently use the online platform iTalki to offer freelance tutoring sessions and conversation practice. Matt has numerous students with ages ranging from elementary school to adult learners. Most of their students are from Russian speaking countries around the world who use their programs to learn and develop their English skills. Further down the line, they are interested in developing language curriculum or working in the educational policy field to change the way languages are taught in the U.S.

These are just some of the ways that Matt has demonstrated their devotion to language learning over the years. Because of their efforts, they will certainly go on to have a robust career in language education. Best of luck to Matt during their senior year and beyond!