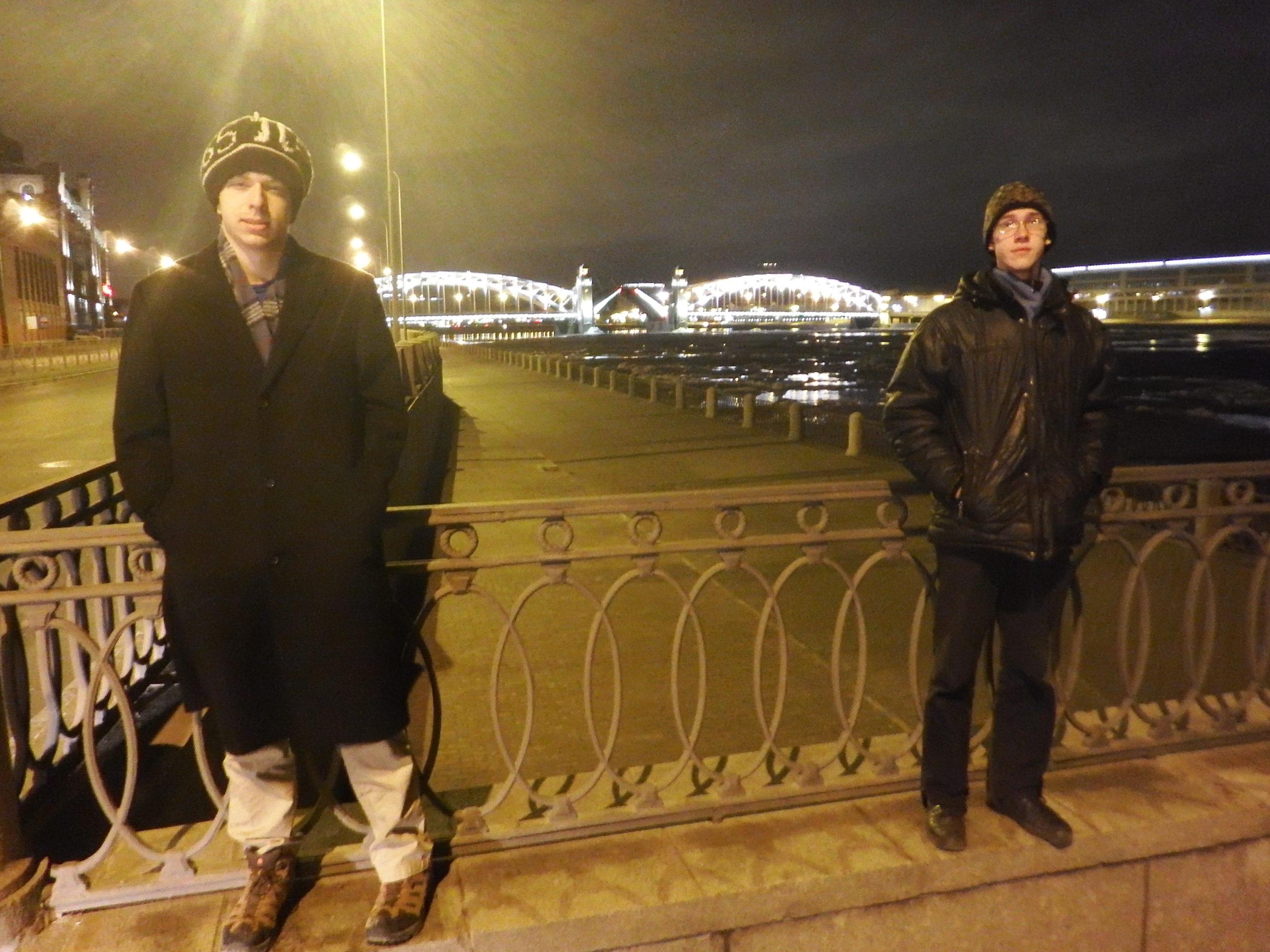 When you hear the word “Russia,” what comes to mind? Is it the grand, domed cathedrals? The rustic bridges stretching over the Neva River? The locals snuggled up in their fur-lined ushankas? These sights were some of the most memorable to Alex Hughes, a senior at MSU studying Russian and Material Science and Engineering.

Alex started studying Russian in high school, intrigued by its unfamiliarity and entirely different alphabet. For his Russian name, he chose “Misha,” a diminutive form of the Russian word “Mishka,” which means “little bear.” Alex thought that this was an appropriate name, given that he is 6’4’’. In high school, he was then able to participate in an exchange program and travel to St. Petersburg, Russia with his class. For two weeks, he lived with a Russian high school student, getting the best of both the local and tourist experiences. While he was there, he appreciated being able to enjoy the culture, as well as the language.

When Alex arrived at Michigan State, his interest in the Russian language led him to declare a second major. He knew that being able to speak another language is an extremely important skill and adding a Russian major to his diploma would give him many more opportunities. Alex is always sure to make the most of his learning, which to him means showing up, speaking up, and helping others do the same. When learning a language, he believes that you will undoubtedly have more success when you are being active in class, reading, creating your own ideas, offering suggestions, and adding your own unique perspective to the classroom.

Two summers ago, Alex had the opportunity to study-away at the Middlebury Language School in Vermont. For eight weeks, he was completely immersed in the Russian language, along with other dedicated language teachers and students. At Middlebury, Alex had four hours of in-person instruction each morning in small groups of around 6-8 students. He had a phonetics class once a week, where he learned how to correctly pronounce Russian words. After class, he was able to choose how he wanted to spend the rest of his day. Alex had the opportunity to audit a graduate class, where he would write down unfamiliar words and phrases he heard to look up later to increase his vocabulary.

While at Middlebury, Alex joined the school’s Russian choir, where they worked with traditional Russian folk music. Learning the music was a fun de-stressor for Alex, and it also helped him with certain aspects of pronunciation, such as finding the difference between Russian ‘t’ and American ‘t’ sounds. He even volunteered to learn some of the squat-like Russian dances to go along with the music. For the performance, the choir dressed up in Russian folk costumes and sang for the Russian school. Alex’s favorite memories were getting to know the other members of the choir and being introduced to some Russian folk music that he could add to his personal playlist.

Being completely immersed in a different language for two months can be really difficult, and Alex admits that there were times when the stress really got to him. “The second or third week in one of our speaking tests, I just broke down crying. I was told that I just wasn’t making sense,’” he says. But he didn’t give up. He held his head high and kept going, which soon paid off. “Later in the day, the instructor that I had my oral exam with said something along the lines of “we think of Misha as our ‘little sun’”, because he’s always in class, and happy and excited. And his sense of humor helps everyone else out.” Which I needed to hear.”

Alex’s Russian improved significantly during his time at Middlebury, and when he came back to campus, he picked right back up where he left off in Vermont. Becoming confident in a new language is exciting for many reasons, and Alex said that his sibling is always telling him about the many benefits of learning a second language, or more languages beyond that. “You’ve got the extra neuroplasticity that comes along with it. In this world, we’re becoming more interconnected. It’s better to know more languages, it makes it a lot easier to interact with other people,” were some of the examples they gave.

After graduation, Alex plans to look for engineering jobs in Russia, or for a company that conducts business with Russia. If engineering doesn’t work out, or if it doesn’t feel like the right thing, he says that he would be interested in pursuing a certificate in TESOL and teaching English in Russia. Alex appreciates how many more doors knowing another language opens for you, and how many more opportunities become available to you.

If there was one thing that Alex could change about his language learning journey at Michigan State, it would be that more people were learning Russian alongside him. He hopes to encourage more university students to see the benefits of language learning and take their studies further to make them more interconnected with the world.

What Alex loves about Russian is that it’s a cool language, and it’s fairly unique. “It’s big enough that people know it, but not so big that everyone wants to be in it,” he explains, “And it’s close enough to English that once you get past the alphabet, it’s fairly simple to understand.” Alex’s time studying Russian in high school, at Michigan State, and at Middlebury has given him an open mind, along with a better understanding of the world and the people in it. He thinks that it is important for Americans and Russians to be in communication, “There are a whole bunch of people that are just like us that are worth getting to know.” By showing up, speaking up, and never giving up, Alex is bringing the two countries one step closer together.

Languages: An Antidote to Hatred

No travel? No problem! Learning a new language during the pandemic