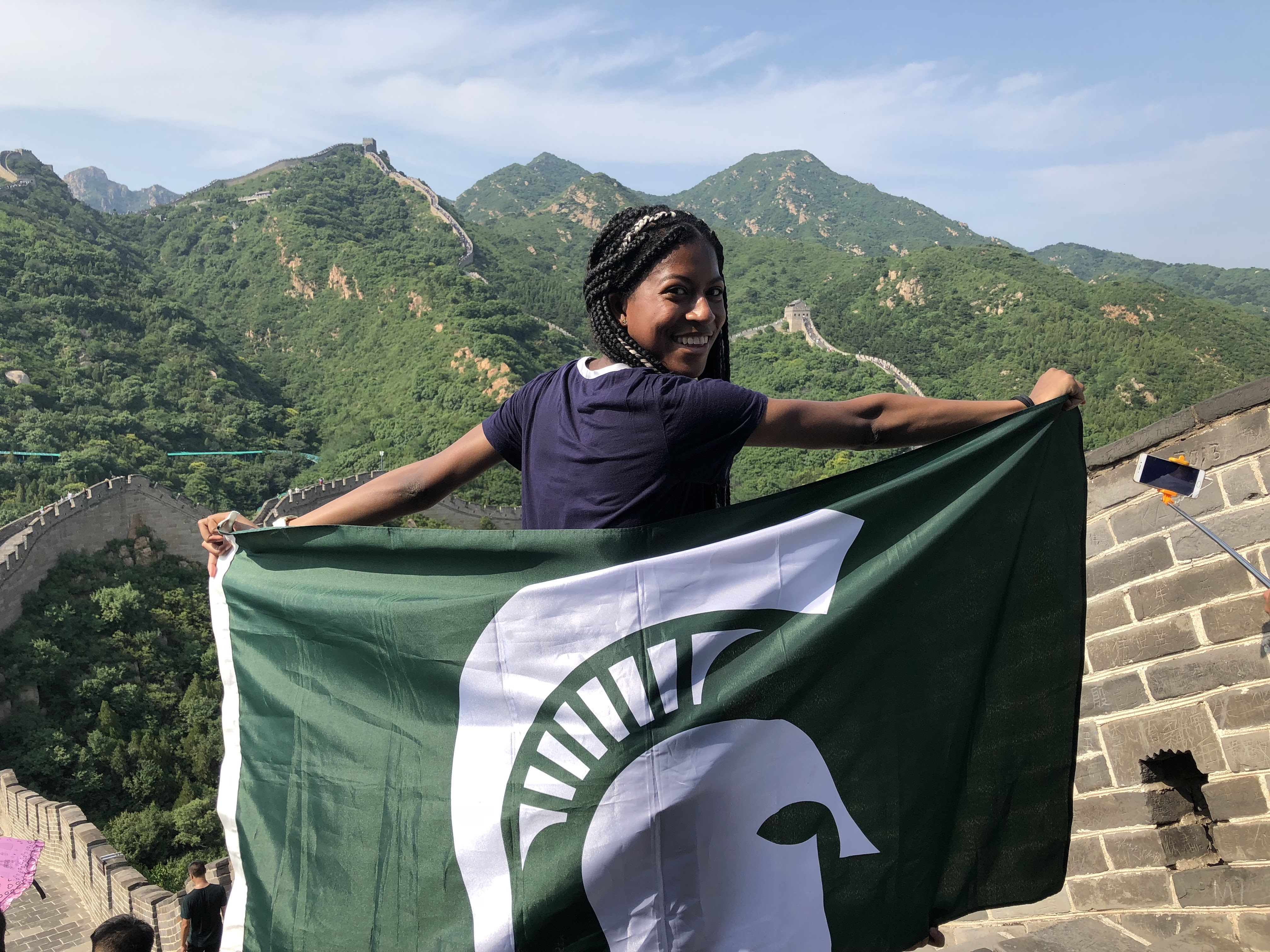 When I asked Alaunie how her college experience would be different if she hadn’t learned a second language, she paused for a second before giving a little laugh, as if to indicate the absurdity of the thought. “It’d be so sad!”

Alaunie has been studying Chinese on and off since middle school and will graduate this spring with a minor in Chinese in addition to her major in zoology. Her two subjects of study might seem as far removed from each other as you could imagine, but she has dreams of connecting the two after vet school. She hopes to travel and work with zoo animals all over the world. With her Chinese background, she’d love to start by working with pandas in China. This specific goal aside, she also credits her Chinese studies for much of the most formative moments and connections she’s made while at MSU. Through studying a new language and culture, she began to connect with others—both humans and animals—in new ways.

Last summer, Alaunie participated in an eight-week study abroad program through MSU, living and studying Chinese in Harbin, China. One of the first experiences that stuck out to her was the strange feeling of being a foreigner—she knew going into the program that it was part of the reality of living abroad, but she hadn’t realized how much she would stand out. People in public places often approached her with fascination, touching her hair, asking if she was from Africa, and even asking to take pictures with her. She recalls walking down a busy street with her host mom one afternoon, speaking Chinese, when a nearby construction worker looked at her host mom and asked her with shock, “She speaks Chinese?”

As Alaunie adjusted to the initial surprise of these moments, though, she learned to remember that people were just asking her out of curiosity and their different backgrounds could explain the moments that seemed offensive at first. She now has empathy for people from other backgrounds when these situations arise, explaining that while she has her own cultural expectations as an American, “I can’t put those expectations on other people, I can just help them learn.”

Not only did Alaunie learn how to better understand others through her language experiences, she also was able to connect with a whole new network of people. As a freshman at MSU she joined the Taekwondo club after taking a 1-credit kinesiology class; though the sport comes from Korea, many of the students in the club also speak or study Chinese. After four years in the group, she’s made many close friends through the sport while at the same time practicing her Chinese skills. She’s even made new friends in a similar way online. One of the ways she started practicing her language skills in college was through a language exchange app called HelloTalk, which pairs native speakers of different languages together to help them practice. Alaunie had been connected to one Chinese friend on the app for a couple of years before studying abroad, and while she was in China, they were able to meet each other in person. For all of these friendships, groups, and even the random interactions on the street, Alaunie is grateful. “I feel like I gained so much by learning from a different culture, cause it forced me to go outside of my bubble and learn about what other people are going through.”

Next fall, Alaunie will attend vet school at Purdue. After that, her future is open as far as where she might travel and practice. One thing she does know is that she hopes to use her language skills to facilitate more scientific understanding between different countries. She observed while learning about tiger conservation in China that when it comes to animal treatment, “a lot of information is being lost because we aren’t communicating with people of different cultures.” She hopes that her work will be able to help remedy this issue. While facilitating the exchange of information across cultures, Alaunie’s Chinese skills will no doubt help her continue building an even greater community of people (and animals) along the way.

SAGA: Discover the World Through Storytelling